Decorating the house would be daunting. At 11,000 square feet, the Mediterranean-style home in North Dallas had many rooms to fill. Owners Holly and Jim Trester, fearlessly optimistic, had a vision for their new residence, and they knew with whom to share it. “Katherine had done our lake house a few years ago, and we liked what she did,” says Holly.

Katherine Snedeker, an interior designer, is president and owner of the Arrangement. With locations in Dallas and Houston, the upscale home decor store is known for its casually eclectic, handcrafted Western furnishings. The store was recognized this year with an ARTS Award, a national honor annually conferred upon home industry retailers exhibiting excellence in design and showroom presentation. Once again, the couple turned to Snedeker, beginning their mission while their new home was still under construction. The uncompleted house was no deterrent to the designer.

“We went to the house before it was finished. The walls were up. It was very raw. The floors hadn’t gone in yet. We listened to what they liked and where they were going with it,” says Snedeker. Showing influences from the Tresters’ many travels, the home was to be casually elegant. Walls of stone, wood floors and iron hardware were incorporated for a rustic ambience. Tall windows were added to bring the outdoors inside. 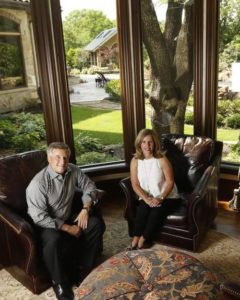 Rose Baca/Staff Photographer Jim and Holly Trester wanted a look of casual elegance for their Mediterranean-style North Dallas home and started shopping for furnishings before the home was completely finished. Michael Hunter Photography A home bar is the center for entertaining. Michael Hunter Photography A carved bed in the master bedroom is flanked by reclaimed wood nightstands with forged-iron accents. Katherine Snedeker, owner of the Arrangement

Rose Baca/Staff Photographer Jim and Holly Trester wanted a look of casual elegance for their Mediterranean-style North Dallas home and started shopping for furnishings before the home was completely finished.

The roughhewn feel and natural atmosphere reflect the couple’s casual lifestyle. “We’re not fancy people. I like the rustic feel. I like iron, wood and stone. I like the outdoors. When you build a house this big, you want it to be warm and inviting,” says Holly, a marketing director for a nonprofit. The home’s floor plan was designed with entertaining in mind. With an extended family and longtime friends, the Tresters chose a design suitable for large gatherings. Central to the residence is a bar and spacious family room.

“We wanted people to love to come over. We’re not formal. We do a lot of entertaining. We have a lot of family gatherings, charitable gatherings and gatherings of friends,” says Jim, 55. Many hours on Houzz.com helped the couple form a decorating vision to share with Snedeker. The look was to be as casual and comfortable as their home. “I had a binder with pictures I took off the internet,” says Holly, 54. With ideas in hand, the couple met at the store with Snedeker and Clif Cauthen, who oversaw the project. The couple went to the store on a series of Saturdays. The process started with area rugs and fabric.

“They wanted us to look at carpets first. They had a saying, ‘Your carpets have to tell a story,’” says Jim, a specialty tax consultant and business owner. Fabrics came next, posing a challenge for Holly, who admits to a preference for patterns that match. “We looked at fabrics. We’d layer fabrics. I’m kind of matchy. I had to get over that.”

On subsequent Saturdays, Snedeker created environmental vignettes within the store representing each room of the Tresters’ new home. Furniture and accessories were arranged within a space the same square footage as a specific room. “We put rugs down and put furniture on the rugs. We can accomplish a 10,000-square-foot house in the store,” says Snedeker. This process allowed the Tresters to see how the furnishings would look adjacent to each other in their home. Decisions were made based on the appearance of the room as a whole. “We listened to what they liked. They wanted an eclectic feeling. One of the questions we always ask is, ‘What’s the most beautiful room you’ve been in and why?’ They were the decision-makers,” says Cauthen.

Though the couple brought little from their previous home, formal dining and guest bedroom furniture, Snedeker and Cauthen worked to integrate it into the new design. “I had sent her pictures of existing things we had. We got the rooms so much more complete sooner,” Holly says. One room proved to be a challenge for the Tresters to visualize. An expansive family room adjacent to the kitchen dining area seemed too big to tame. To create an ambience of comfort and conversation, Snedeker planned for two large sofas to face each other. A 9-foot server was placed behind one sofa and topped with candlesticks and a tall floral arrangement. “It created separation. You have to manage the space,” says Cauthen.

As the custom furnishings arrived from the manufacturer, they were stored by Snedeker until the house was completed. A date was set to perform the installation. “They showed up with three trucks. First they brought in everything we bought. Then they brought in all these accessories,” says Jim. The three-day installation began with placing rugs and hanging light fixtures. Later, furniture was added and wall decor was hung. To polish each room, Snedeker and Cauthen added accents for approval by the Tresters.

Despite its size, the house is familiar and comfortable, a welcoming place for family members and neighbors. “We wanted something casual. We wanted people to love to come over. Friends say it’s inviting. They’re not afraid to sit down on the furniture,” says Jim. For Snedeker, the Tresters’ house exemplifies her love of helping clients realize their perfect home. After first becoming a buyer for the Arrangement in 1989, Snedeker moved into design sales, later becoming a partner and then sole owner 13 years ago. In addition to custom furniture, the store offers recycled and upcycled decor. Sustainability is important to Snedeker. Wood furnishings are frequently crafted from reclaimed timber with finishes that produce no off-gassing.

The ARTS Award is confirmation of her passion. For the Tresters, no confirmation is needed. “I can’t say how much I enjoy being in this house,” Jim says.